On December 28, Xiaomi will launch its next flagship phone

Xiaomi Inc., china based smartphone company is all set to launch its new flagship series on December 28. The launch event will be held in China next Tuesday and begin at 7:30 PM local time. As of now, Xiaomi hasn’t announced how many smartphones the Mi 12 lineup will have, but we know there are […]

Xiaomi Inc., china based smartphone company is all set to launch its new flagship series on December 28. The launch event will be held in China next Tuesday and begin at 7:30 PM local time.

As of now, Xiaomi hasn’t announced how many smartphones the Mi 12 lineup will have, but we know there are at least three of them since the company execs used the phones for their Weibo posts – vanilla 12, 12X, and 12 Pro. Another model, the Ultra has also been reported, which isn’t officially confirmed yet.

A poster for the launch event was shared by Xiaomi on its Weibo account, along with an image of Chinese athlete Su Bingtian and a December 28 launch date. The company has not mentioned which Xiaomi 12 series models will be launched on the given date The poster does not reveal anything either. Meanwhile, Xiaomi founder Lei Jun, General Manager Wang Teng Thomas, and Group President Lu Weibing have been posting on Weibo using, Xiaomi12, Xiaomi12x, and Xiaomi 12 Pro handsets.

The Chinese smartphone brand hasn’t divulged any specifications for the lineups besides confirming that it will be powered by the snapdragon 8 gen 1 SoC. There is still no word on whether all three smartphones will feature the Snapdragon 8 Gen 1 chip or if this is a feature reserved for the Pro variant only.

However, reports have tipped the series to include four smartphone models — Xiaomi 12, Xiaomi 12X, Xiaomi 12 Pro, and Xiaomi 12 Ultra. The Xiaomi 12 series is a successor to the company’s Mi 11 series. The full specifications of the phones, along with pricing details, have been leaked by a China-based tipster days before their official debut, leaving not much room for surprise.

Besides a 120Hz refresh rate display, the handset will feature triple rear cameras, including a 50-megapixel primary camera. Additionally, the Xiaomi 12 is expected to pack a 4,500mAh battery. As part of the upcoming Xiaomi Smartphone lineup, Xiaomi will release vanilla Xiaomi 12 and Xiaomi 12 Pro models along with Xiaomi 12X and Xiaomi 12 Ultra models.

The cases of Xiaomi 12, Xiaomi 12 Pro, and Xiaomi 12 Ultra were leaked online revealing the designs of the upcoming Xiaomi flagships. Several recent leaks have revealed case renderings of all of these devices. The latest leak reveals the design of the alleged Xiaomi 12 Pro.

As seen in the renders, Xiaomi 12 Pro features a rectangular camera module. A big cutout primary camera sensor can be found on this module, as well as four other cutouts for additional cameras and an LED flash. As for the display, it has a curved appearance with minimal bezels.

The cases of the Xiaomi 12 and Xiaomi 12 Pro appeared to be almost identical but the case of the Xiaomi 12 Ultra is quite different. Unlike the other two cases, Xiaomi 12 Ultra has a circular camera module with a big circular camera cutout at the center. This sensor appears to be surrounded by a total of seven cutouts. Out of which, four seem to be for the camera sensors, whereas the rest of them are likely for the LED flash. 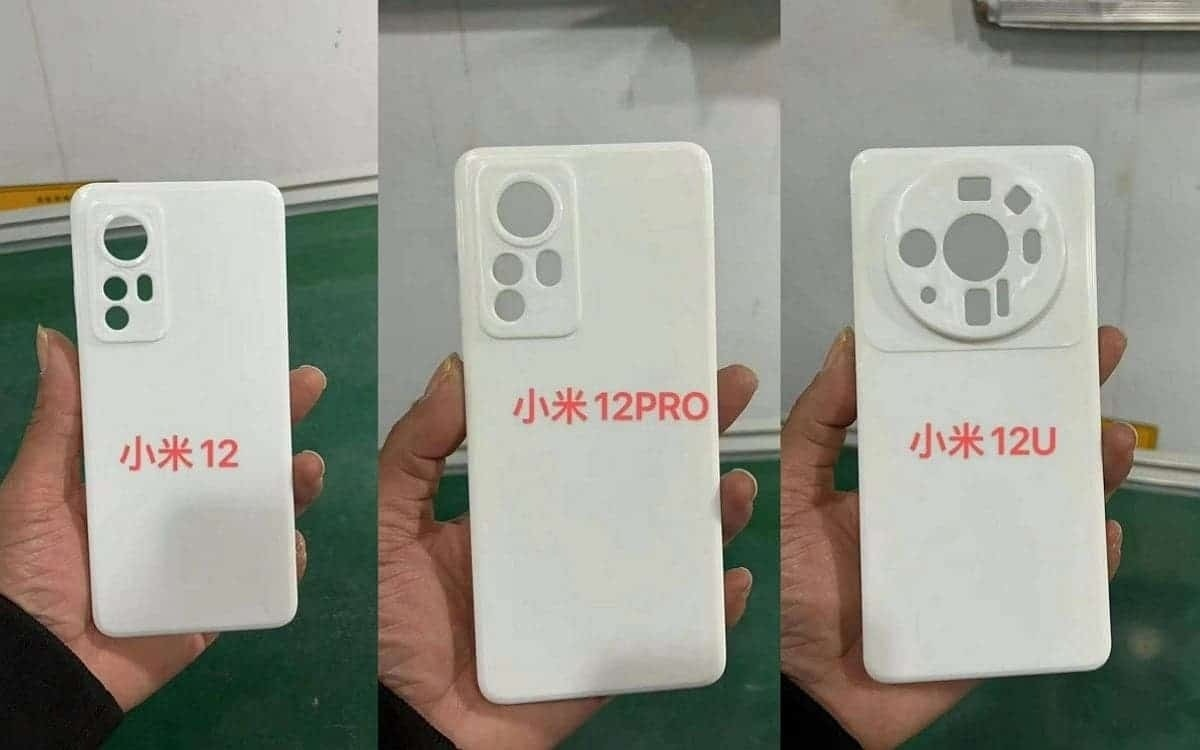 As previously speculated, the Xiaomi 12 packs a 6.28-inch screen size. The panel has a Full HD+ resolution and 120 Hz refresh rate. Other display features include HDR 10+ certification, a Display Mate A+ rating, Dolby Vision, and more. Under the hood, the phone draws powers from a Qualcomm Snapdragon 8 Gen 1 SoC. The device has up to 12 GB of RAM and 256 GB of Internal Storage. Xiaomi’s upcoming phone will pack a 4,500 mAh battery with 67 W fast-charging support. The phone has 30 W wireless charging.

Moving around to the back, the Xiaomi 12 will come with a triple-camera setup. The main camera is a 50 MP snapper with 1.28-inch and Optical Image Stabilization. It comes alongside a 13 MP camera with a 123-degree Field of View and a third telephoto camera that offers 3x Optical Zoom and Optical Image Stabilization. The Zoom lens support 10x hybrid zoom and 30x digital zoom. The handset runs Android 12-based MIUI 13 straight out of the box. The new devices will also mark the debut of MIUI 13. Other features include NFC, IR Blaster, Bluetooth 5.2, Wi-Fi 6E, 5G, X-axis linear motor, and etc.